I’m quite enthusiastic about playing tower defense games. My latest one is Penguins Attack 2. This one is pretty good because in addition to levels, bonus levels, and tower upgrades, you have to earn experience points to get even bigger tower upgrades. Level achievements include beating a level, killing the boss, and beating a level flawlessly.

I recently conquered level 8 . In the earlier levels the strategy is to get the most powerful towers quickly. As you move onto the higher levels (4 onwards) you need to make the enemy route as long as possible with basic towers to buy you time. You also need to space out your powerful towers so that they can hit new as well as close to exiting enemies.

Below is the screenshot of the configuration I used to beat it :

This image shows the boss for this level 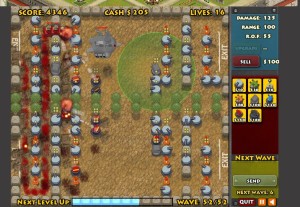 Penguins Attack 2 level 8 about to beat it 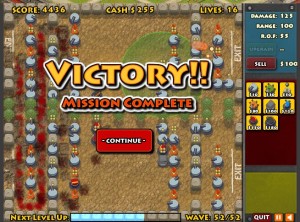 Ahh the smell of victory